The lineage of this art can be traced back to the Henan Province in China. The art, at that time, was known as Saulin Szu Chin Ba Quan fa, (Young Forest Temple, Chin family, Eight, Fist method), and eventually moved from China to Korea. There, the art blended with the native Taekkyeon, (jump/kick and fist methods). In Korea, the art was known as Sorim Sa Cheol Kwon, (Young Forest Temple, Iron Fist Method). The system absorbed the Five Commandments, known as "Sesok Ogye", authored by the monk Won'gwang Popsa. These commandments are often associated with the Hwarang warriors. The Chinese hand forms were blended with the Korean Taekkyeon forms creating a strong system of self-defense.

At that point in time, the head family, Kim Ji-kooh, lived in the area known as Yeongdeungpo, near Seoul, the present capital city of South Korea and was trained in Taekkyeon and later other arts such as Tang Su (China Hand), Chang Mu Kwan and Kong Soo. The armies of Japan occupied Korea, in the late 1880’s, bringing with them the art of jujutsu, which was later used by Master Kim to enhance this style.

In 1950, as a member of the 1st Provisional Marine Brigade, Albert Curtis Church, Jr., met and began studying Kim's Sorim Sa Cheol Kwon.  Church sensei was rotated stateside in 1952 where upon he began teaching Kim's art.The style moved to Japan, Mishima-shi, Shizuoka-ken, in 1956, when Kim sought medical treatment which was not available in the battle torn Korean nation.  In the Japanese language, the system was then called Shorinji Tekken Ryu.

In May 1967, Master Kim called for Church sensei to study with him in Japan.  Late in 1967 Church was named the art’s successor and upon Kim’s death, received the soden, scroll of transmission and became the next lineage Soke/Soji/Head Family of Shorinji Tekken Ryu, and related arts.

Nippon Kobudo Kamishin Ryu
While living and training in Japan, Church sensei became close friends with Shogo Kuniba, Soke (by succession), of Motobu-ha Shito Ryu Karate-do. Kuniba sponsored Church before the Zen Nippon Kodudo Renmei and Zen Nippon Karate-do Renmei of Kyoto and Osaka after reviewing the Shorinji Tekken Ryu Soden that Church received. It was decided at that time that the art of Shorinji Tekken RyuTM should be restructured and renamed as Nippon Kobudo Kamishin Ryu. Therefore, the newly founded name of this art was officially released in Japan in 1968.
A special scroll was prepared by Kuniba and presented to Church, in Japan, in 1968.

In 1969, prior to Church's return to the United States, Kuniba presented him with a kanban, (formal teaching authorization sign).

After receiving the authorization and support of Shogo Kuniba, Church returned to the United States to teach the newly renamed art of Nippon Kobudo Kamishin Ryu. It was Church's goal for his students to train within the teachings of the "martial way".


Shorinji Tekken Ryu
The organization Church sensei began shaping eventually flourished with over 7,000 registered students. Then in the mid 1970’s-time frame after a series of events, the organizational structure began to falter. When the dust settled, events found the hombu (headquarters school) dojo closing, and the entire upper level of the organization hierarchy being removed. Church had literally become inaccessible and was not seen for approximately one year. During this time, a number of top-level students stepped away from the art. However, once Church was back on the scene and the hombu re-opened, the residual effects from the confusion that started in the mid 1970's never seemed to disappear.

Then unexpectedly in 1980, Church sensei died.

It was Church's goal for his students to train within a combined martial structure, therefore, during the 1970's, Petit earned separate black belt rankings under the Kamishin Ryu system.

By 1979 Petit moved to Texas. In 1980, he received a late night phone call from Robert and Linda Kelly informing him of Church's death (Linda Kelly is Church's oldest daughter).

In 1995, Robert Kelly, shihan, signed and sealed a letter of lineage transmission to him giving Petit full sponsorship, permission and backing to carry on the Shorinji Tekken Ryu lineage teaching as Head Family.

Since that time, and to this day, Petit has trained in various arts to enhance his martial, cultural and philosophical knowledge:

No copies of the original scroll from Master Kim have been produced. However, the scroll itself has been translated by an Asian Studies Professor at the Center for Asian Studies, University of Colorado, Boulder, Colorado.

Displayed below is a partial image of the scroll created by Kuniba sensei and given to Soke Church as seen directly below.

…and Kuniba sensei’s certificate of support for Soke Church’s inherited art and the newly founded Kamishin Ryu art seen below. 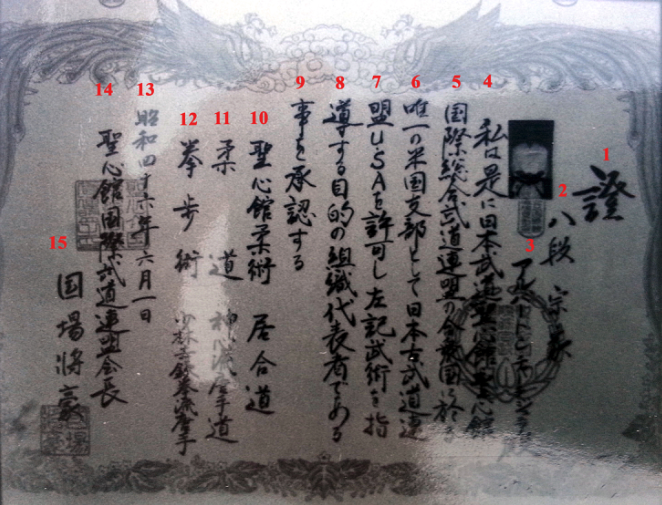